LPC Living is a socially minded property development company specialising in urban regeneration. Based in the North West of England, LPC Living have built in excess of 1,300 homes across the region.

LPC Living's approach is rooted in being conscious of the history and community surrounding the developments they build or restore. Fonthill Mews, whilst their first initiative in London, adhered to this same mission. From utilising local contractors and suppliers, to ensuring the development was sympathetic to its history. The mews were restored and built into individual homes using high quality, often hand crafted materials. The end result was a set of design-focused, beautifully finished properties steeped in history and craftmanship.

“Claire and her team completely understood the vision of the property and what we were expecting to achieve regarding marketing.  She attended site on a regular basis and it was great to have her working with us as she had the same enthusiasm, creativity, knowledge of the local market, the local community and ability to showcase what we believed was a fantastic product. The photography, videos and overall marketing were second to none.” 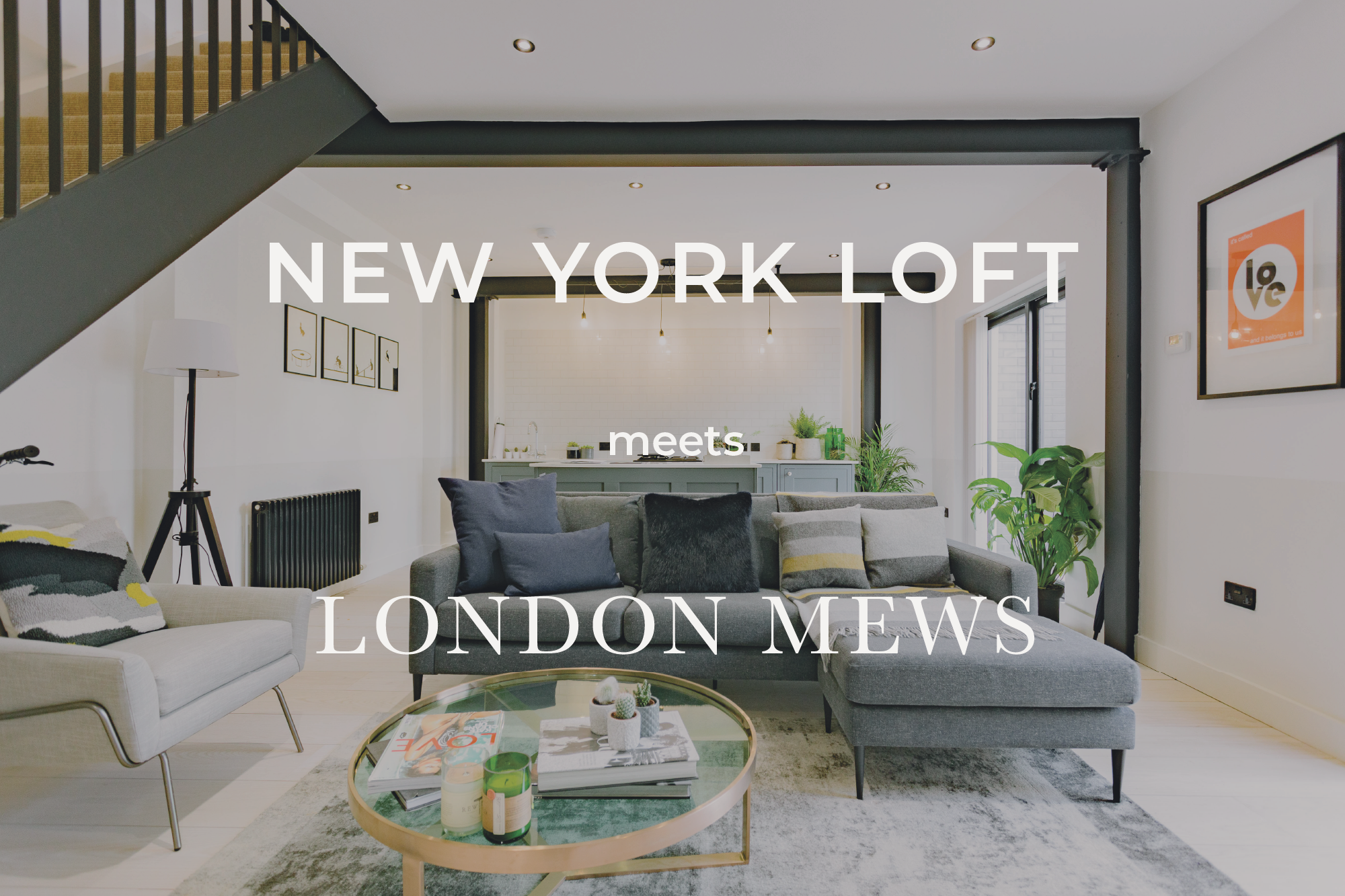 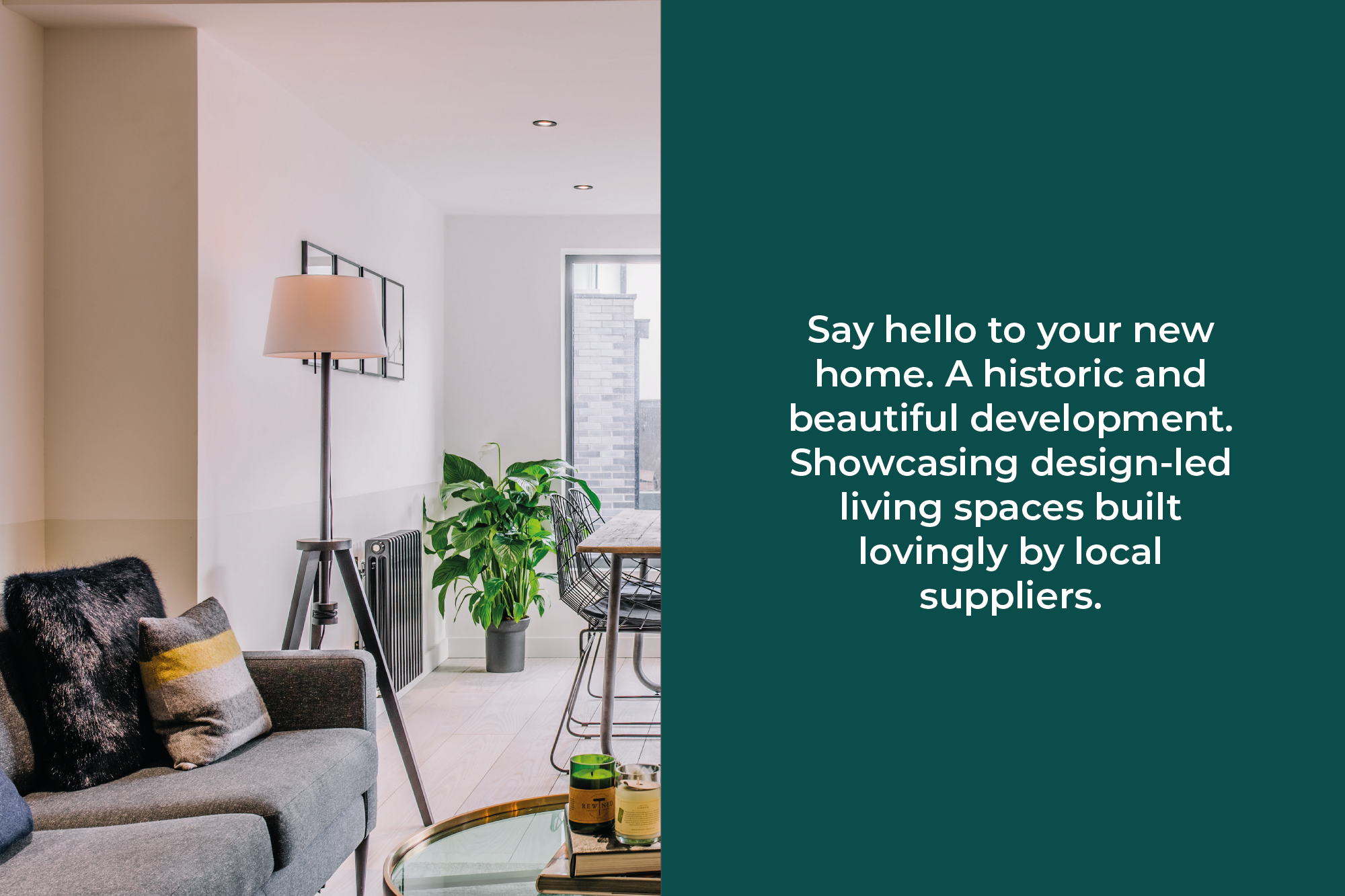 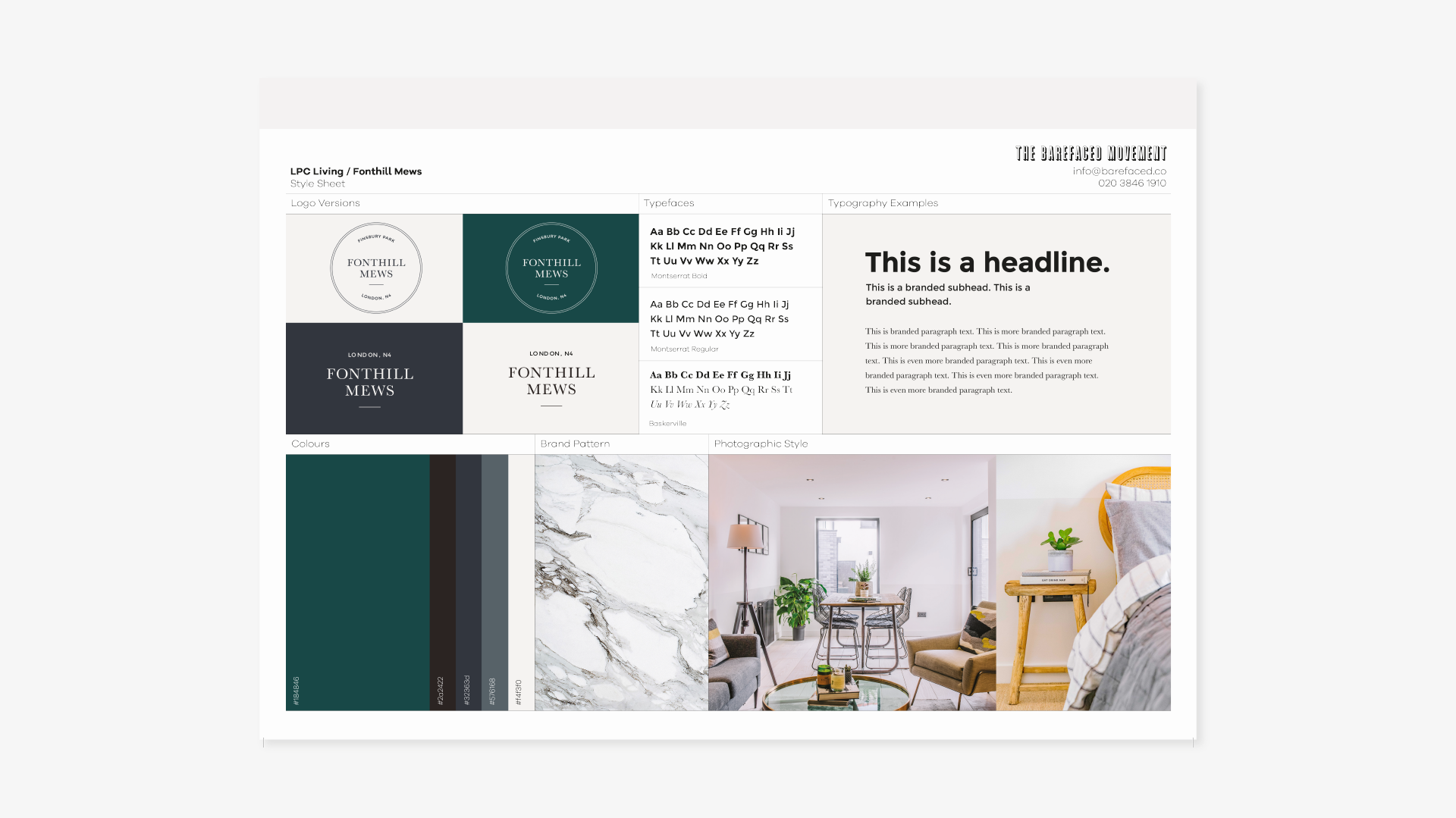 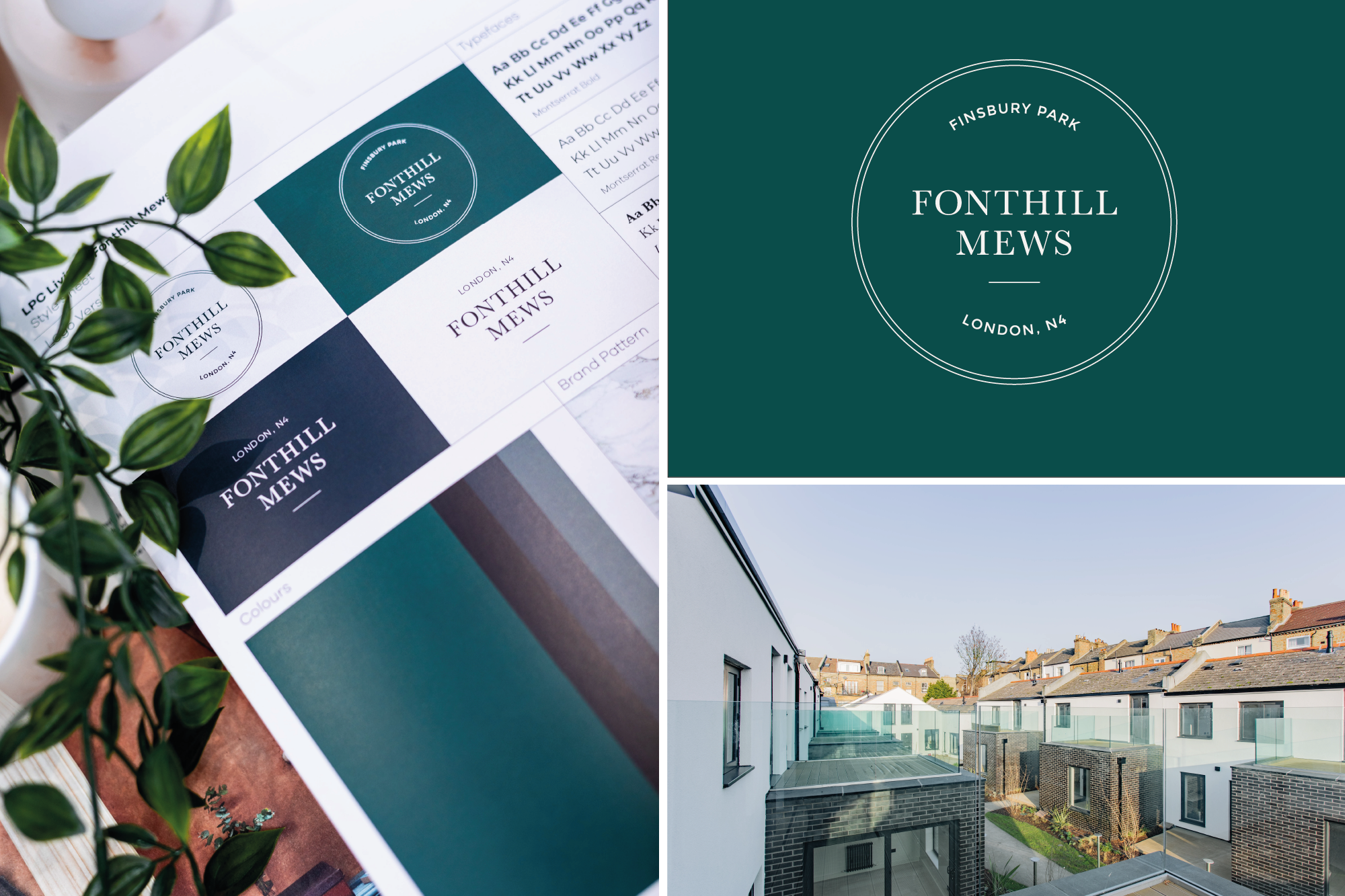 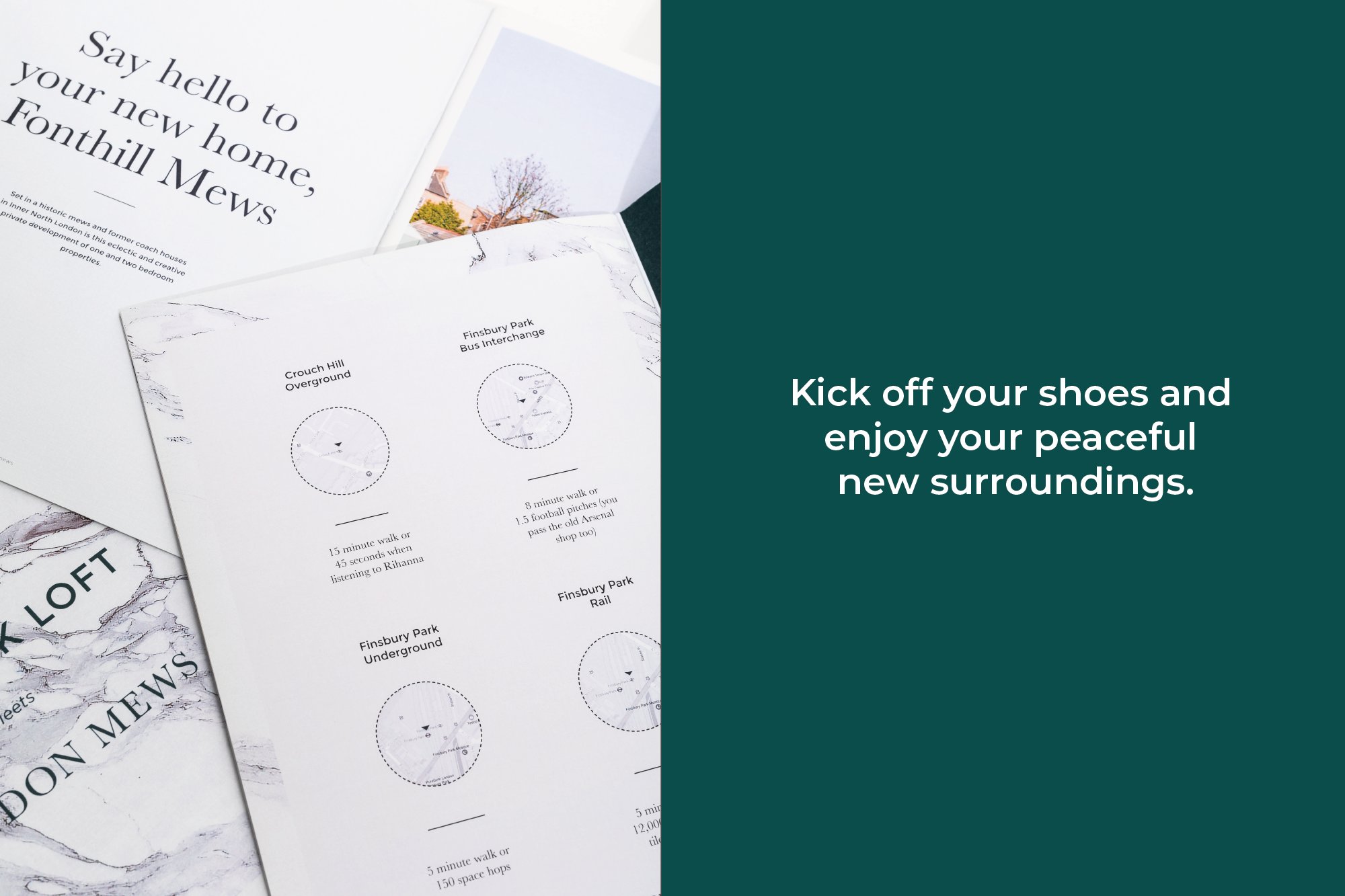 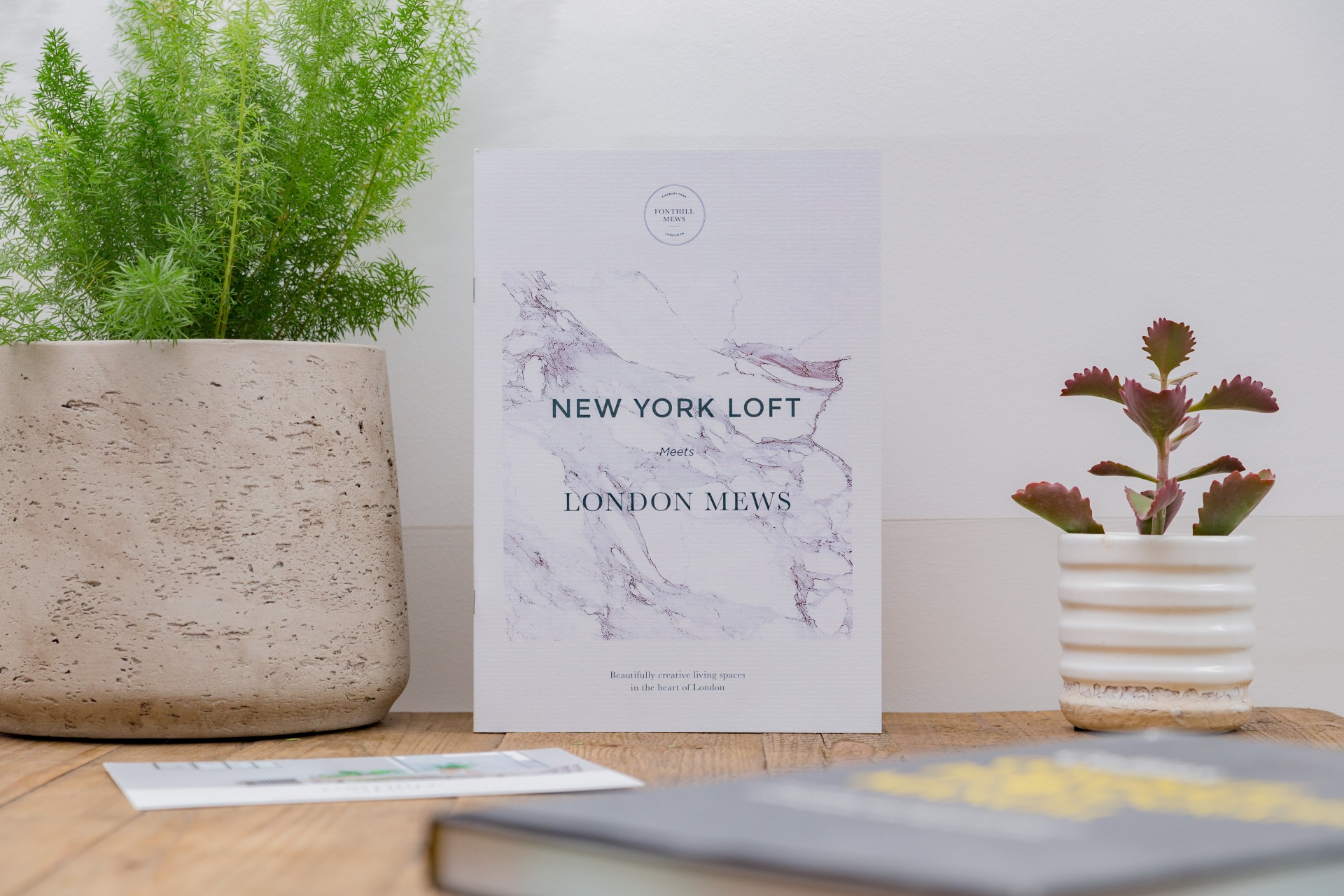 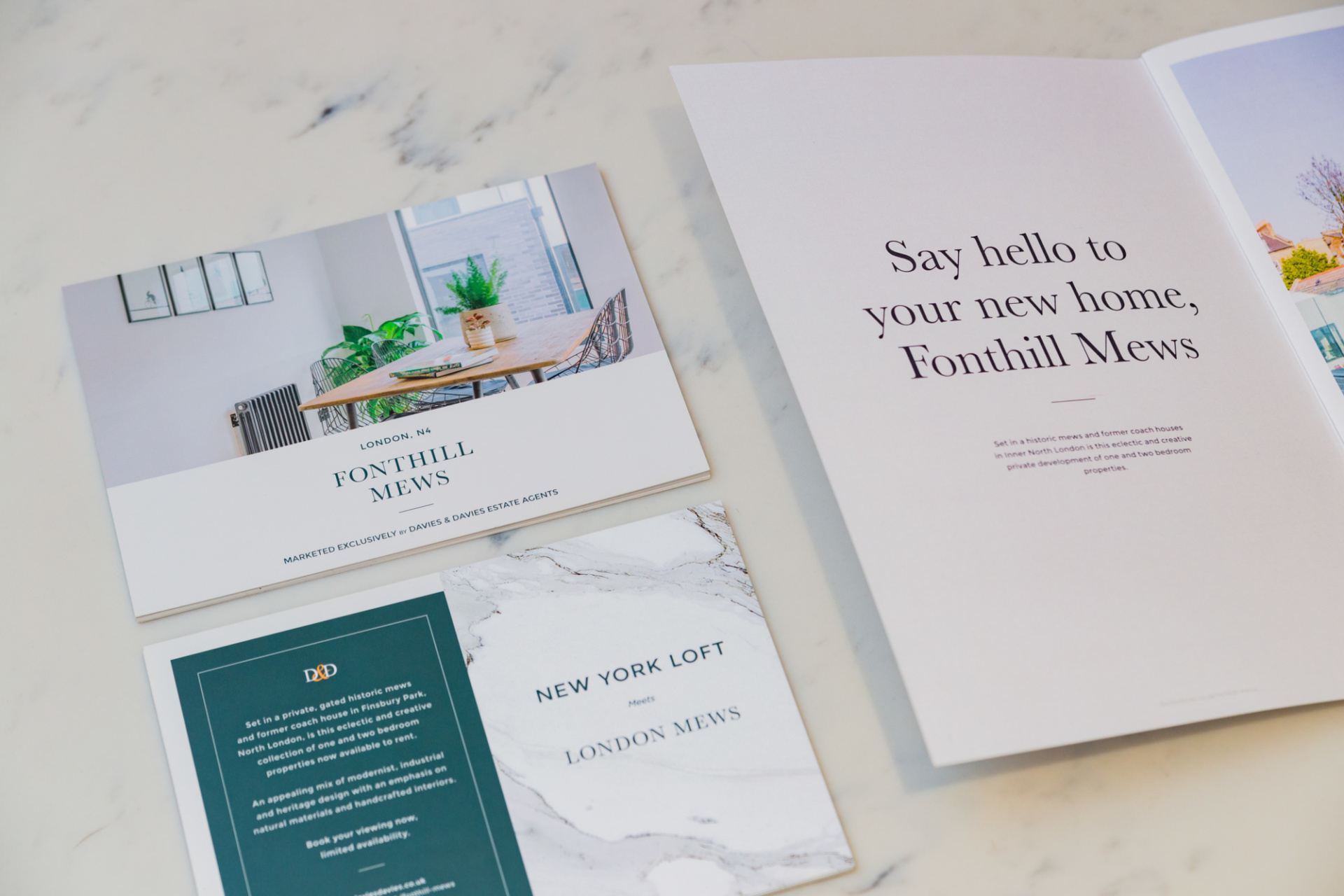 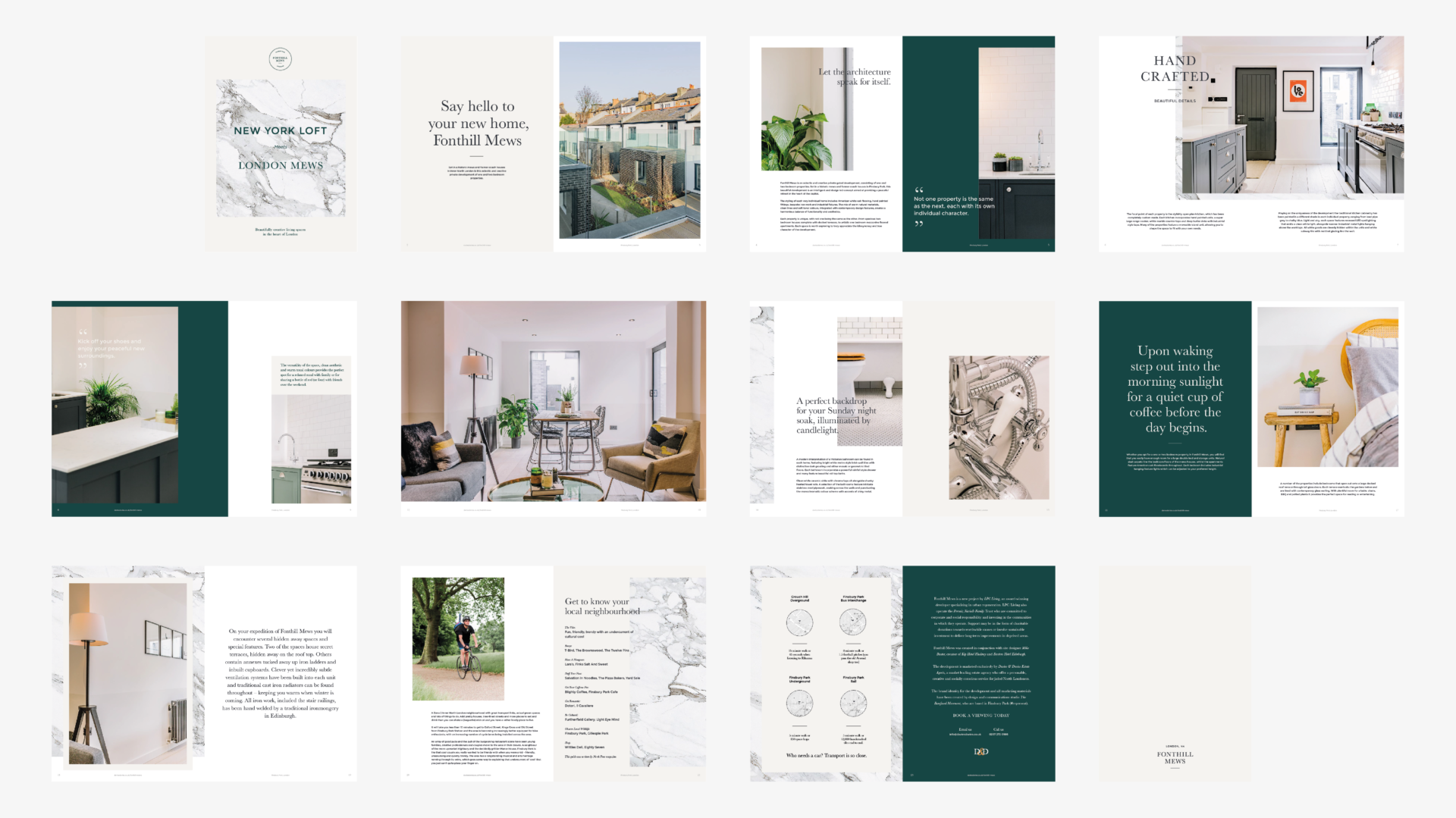 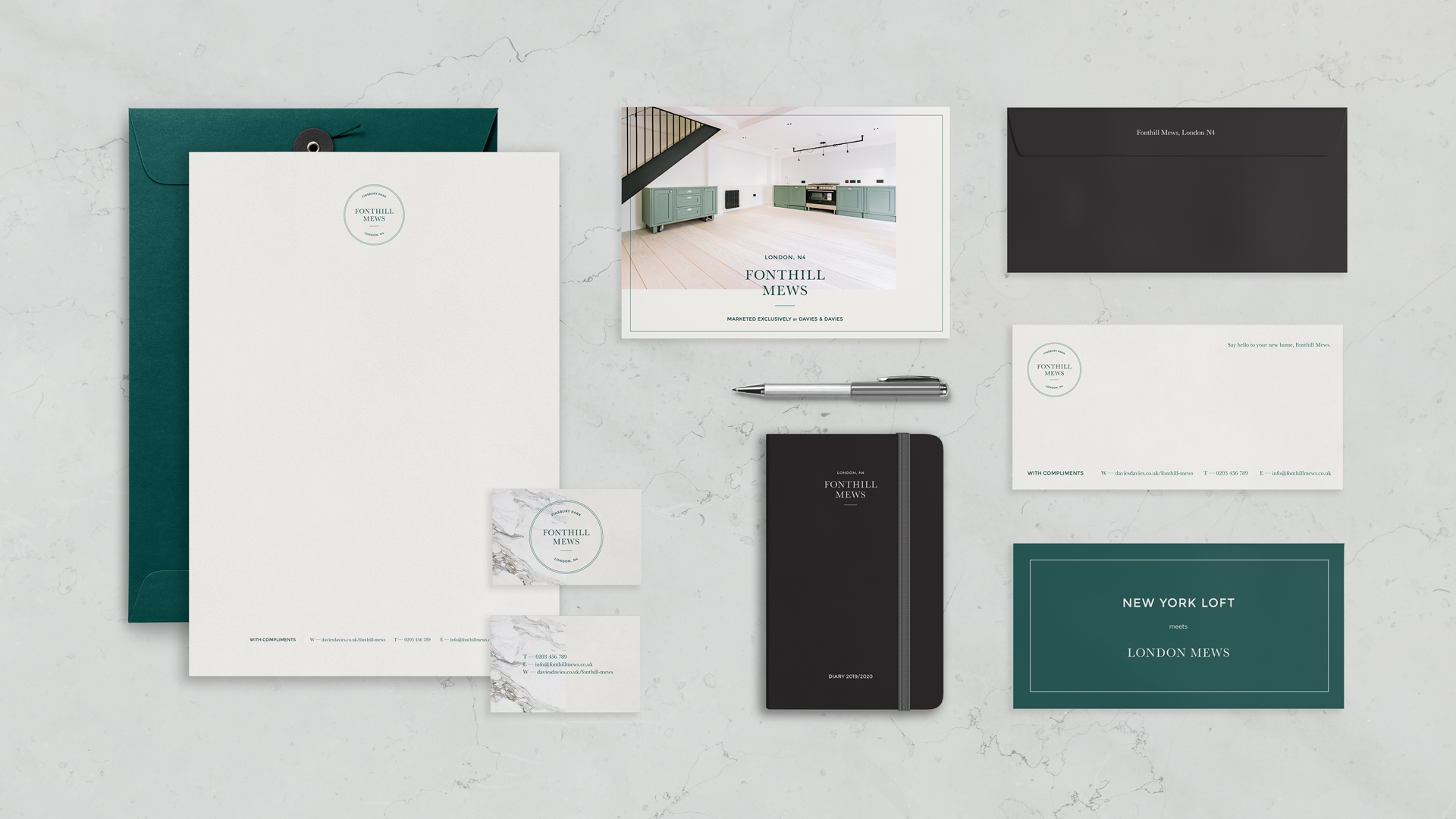 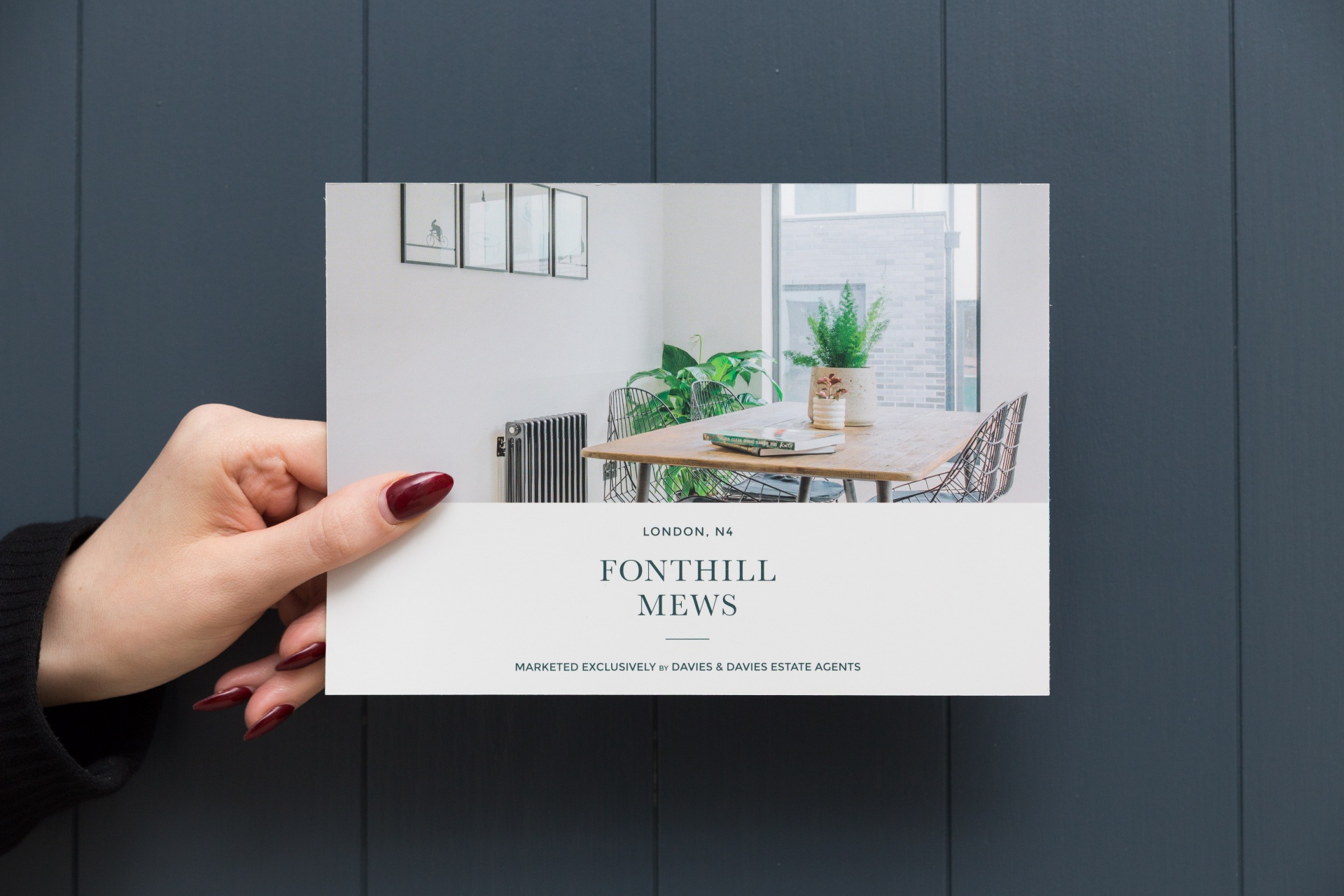 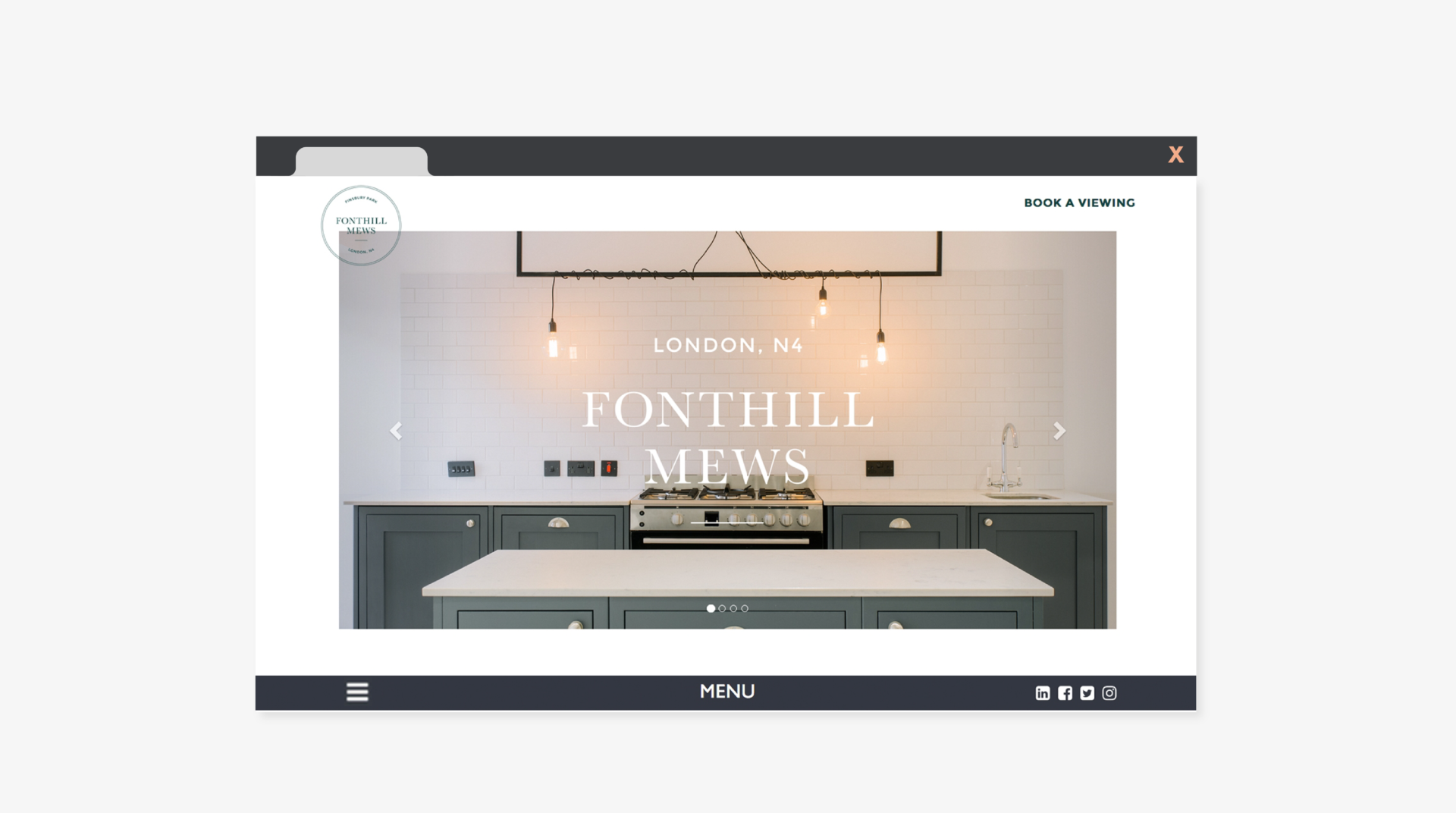 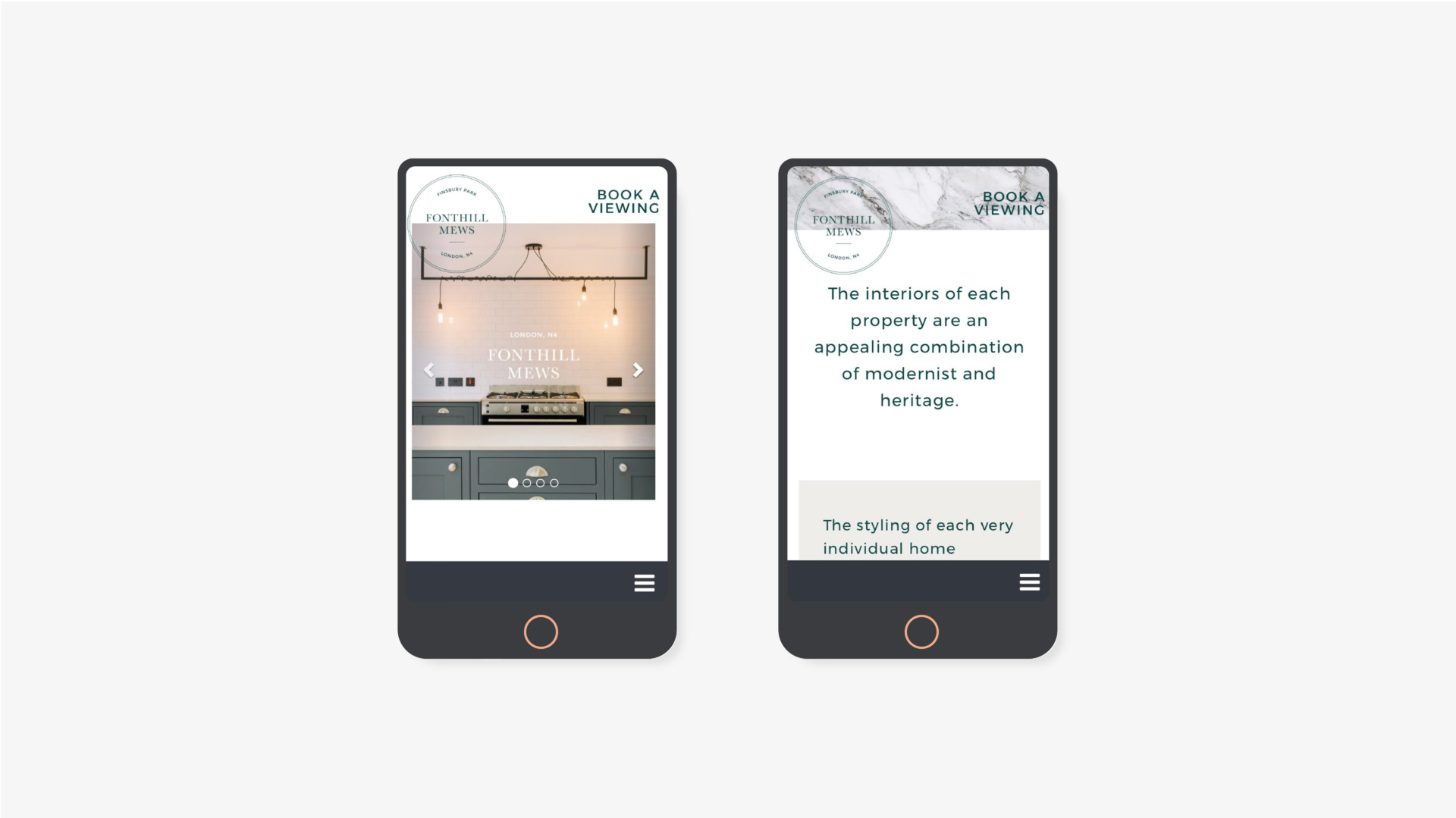 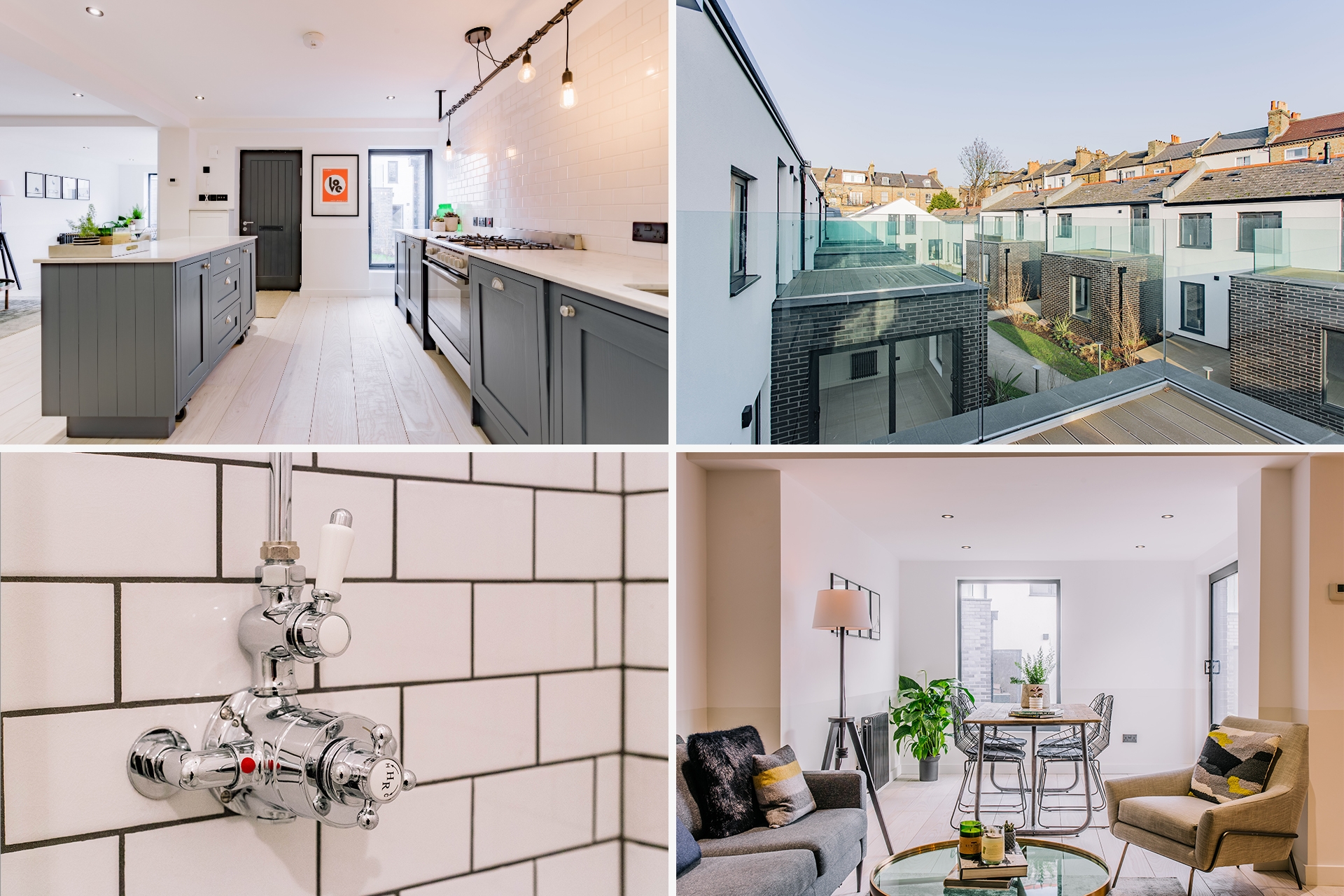 We first devised the slogan ‘New York Loft meets London Mews’ as a reflection of the interior styling and architectural designs of the development. This was then used as the nucleus of the brand identity. From here we chose a colour palette of steely greys to reflect the industrial elements of the development. This was complimented with a shade similar to ‘British racing green’ to symbolise the heritage of the mews and to represent the abundance of natural materials used in the build. The iconic ‘badge’ logo references London’s famous blue plaques that link people of the past with buildings of the present. A marbled pattern was incorporated into the design aesthetic, inspired by the finishes used in the bespoke kitchens, which were a focal point of each new home.

We took an aspirational tone-of-voice, influenced by travel journals, which encouraged the reader to daydream about their lives living in Fonthill Mews. A little wry wit was added subtly throughout the copy. This injected a down-to-earth undercurrent that prevented the branding from seeming ‘stuffy’ and helped appeal to the target demographic of millennial professionals. The photographic imagery tells an equally aspirational story. Overexposed, in order to properly portray the brilliance of the interiors, each image was processed to be clean yet colour accurate. We further experimented with unusual vantage points to show off features.

We pushed three core messages as part of an integrated marketing campaign which was spread across direct, digital and out-of-home advertising. These messages were simple and aimed at engaging the imagination of potential tenants, whilst driving the desire to obtain the lifestyle offered by living in Fonthill Mews. The core messages were: ‘New York loft meets London Mews’, ‘let the architecture speak for itself’ and ‘say hello to your new home, Fonthill Mews’. We also built a temporary microsite for the project, with a consistent call-to-action at touchpoints across the entire site. The microsite was hosted within the LPC’s estate agent’s own website but could just as easily have been hosted as a standalone site.

Take a look at another property development case study by clicking here.